I recently watched a fascinating video of a Richard Dawkins production.  It is a brief lecture at Oxford by Sam Harris entitled, "Who Says Science has Nothing to Say About Morality?"

Sam Harris identifies himself as a secularist and an atheist, but admits that he is troubled by the prospect of a world without "a universal moral framework."  He points out that religious people have long suggested that atheism would lead to an erosion of moral standards.  Dr. Harris says that he shares the concern that "unless we have a universal moral framework... a sense that good and evil and right and wrong really mean something, then humanity will lose its way."

Harris outlines his theory for atheist morality beginning with the premise that "the worst possible misery for everyone is bad."  To him this seems obvious.  Since that is so, he says he has a basis for morality quite apart from religion.  According to Sam, the universal consensus should be that it is good to seek the "well being" of conscious creatures.

Sam focuses on the the "sadism and misogyny" of the Taliban in Afghanistan as an example of he thinks must be agreed upon as being truly bad.  He describes the misery and peril of women and girls in Afghanistan.  He points out that women there die at world record levels.  He uses the example of a father throwing acid in his daughter's face as punishment for learning to read.

Harris mocks an unnamed woman who apparently shares his atheism/secularism but who, in discussion with him, said that the sadism and misogyny of the Taliban was not objectively evil, but only evil in Sam's opinion.  Harris laments the irony that it is the religious dogmatists that agree with him about the moral evils of such things.

I empathize with Dr. Harris over the his feelings that we need a universal moral framework.  But I disagree completely with his idea that any consensus of human opinion can ever be an adequate basis for any moral standard.  I believe that a true moral standard is determined by its correspondence to a morally perfect Creator God.

For one thing, if moral standards depended on the consensus of human beings there would never be moral standards because there are very few things that we could reach a consensus about.  A consensus is much more than a simple majority.  A consensus requires general agreement.  Even in the matter of Harris' example of the Afghan Taliban Sam would not be able to come up with at consensus that it was morally wrong.  As he points out, his fellow secularists and atheists think it is just a matter of opinion.  The billion or so Muslims in the world (14% of earth's population) might object to his views.

For another thing, even if consensus over morality were possible, we would still be left without the desired "universal moral framework... a sense that good and evil and right and wrong really mean something."  This is because such a consensus could (and almost certainly would) change over time.

Besides that, the consensus would not mean anything universal.  The "evildoer" in Dr. Harris' example, who throws acid into the face of his little girl might be hailed as a hero in his Afghan village - or even in the wider Muslim community - for putting his piety above his family.  If this were the case, how does Dr. Harris' belief that this act is "evil" really mean anything at all?

Unless there is a personal moral being who is greater than man and who can bring man into judgment, then every man will be a law unto himself.


(Judges 17:6 NKJV) In those days there was no king in Israel; everyone did what was right in his own eyes.

Science of the Gaps

In arguing that evolutionary science is empirical and creationism is not, evolutionists have often mocked what they call the "God of the Gaps."  They say that when creationists come to something that they cannot explain - like what could be a reasonable precursor of the biochemical molecular machines in cells - creationists jump to the idea of divine design rather than continue to pursue a naturalistic explanation.

Of course the biochemical machines in question are more complex and elegant than any man made technology - say a cell phone or laptop computer - and they operate according to large volumes of programmed information (DNA) without which they would be meaningless structures - like a cell phone without a network.  Evidently if an evolutionist found a cell phone on the sidewalk, he could imagine that it was NOT the product of design, but somehow fell into place by fortunate accidents.

I was watching a BBC program about modern cosmology.  Starting with the Big Bang they outline the "Standard Model" and the ability of scientists to apply mathematics to the observed universe according to the theory that everything sprang from nothing 14 billion years ago in a huge explosion.  (I won't deal here with the fact that 14 billion years - even if it were all given to biological evolution with a "positive" mutation in every generation - could not begin to be enough time for the complexity of life as it now exists.)

How fascinating!  The Big Bang and the Standard Model explain everything we can observe!

Except that there is a uniformity in the universe - all the same temperature/energy all the way through and across and in every direction.  That doesn't fit the theory.  If there was a Big Bang then things should be as uneven as in any explosive blast.

Solution?  INFLATION.  The Big Bang was not so big after all, but remained relatively small for a billion years until all the energy evened out throughout it.  THEN the universe suddenly inflated (at many times the speed of light) to its enormous size.  How or why this should happen is completely unexplained.  But it is an accepted theory because it allows science to cope with the fact that the Standard Model doesn't explain the uniformity of the energy in the universe.

Wonderful!  The Big Bang and the Standard Model, plus Inflation explain everything we can observe!

Except that the galaxies we observe don't behave like the model predicts they should behave.  Given the known laws of gravity the galaxies are spinning wrong.  The outside elements are moving at the same speed as the inside elements.  That cannot be happening.  But we can see it with our own eyes.

Tremendous!  The Big Bang and the Standard Model, plus Inflation, plus Dark Matter explain everything we can see in the universe!

Until we discover that unlike the Standard Model predicts, the universe is both expanding and accelerating in its expansion.  The Model predicts that expansion should slow - that the enormous mass of the universe should cause gravity to pull everything back together.  But the acceleration of everything away from everything else means there is still some sort of energy operating on the universe that is greater than the pull of gravity!

Solution?  There must also be DARK ENERGY.  We cannot see it.  We cannot measure it.  We know not where it originates or why.  But it must be out there because otherwise the equations don't work.

Fantastic!  The Big Bang and the Standard Model, plus Inflation, plus Dark Matter, plus Dark Energy explain everything we can see in the universe!

But wait!  There are places in the universe where the objects are behaving in a very peculiar way!  There are places where everything seems to be swept up in a stream and funneled together.  This shouldn't be happening.  How can this be?

Can you guess the solution?  There must be something called DARK FLOW!  (The program suggests that this is not widely accepted yet - but it seems to be the leading candidate to explain the observations.)  Somehow there are unexplained rivers of energy sweeping up hundreds of galaxies.

As far as I know, all of these theoretical fixes to the standard model may someday be proven in some objective way.  That doesn't bother me.  I believe that the God of the Bible created the universe and that He has made it wonderfully complex for His own glory.  (Inflation - the universe moving out to its current size in a few micro-seconds at a speed far exceeding the speed of light - sounds more like the biblical account of creation than like the big bang.)

The more important point from my perspective is that these naturalistic scientists - who cannot admit any "supernatural" elements in their theories - are nevertheless incorporating unobserved, unmeasurable and inexplicable elements of Inflation, Dark Matter, Dark Energy and Dark Flow.  It seems to me to be science of the gaps.  Any explanation will do, as long as it does not lead to God.


(Psalms 19:1–2 NKJV)
1 ¶ The heavens declare the glory of God; And the firmament shows His handiwork.
2 Day unto day utters speech, And night unto night reveals knowledge. 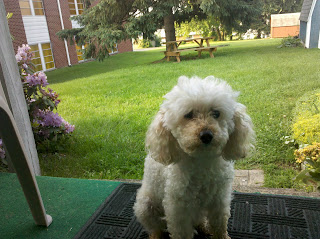 There is a rabbit in this picture.  Can you see it?  Tiny is willing to chase rabbits - even anxious to chase rabbits. But since he only sees in black and white - he cannot see the rabbit unless it moves.
He looks kind of sheepish here because he didn't find the rabbit when I told him it was there.  He ran out into the yard and looked everywhere but where the rabbit was.  He got to within about six feet of this rabbit - and STILL didn't see it. 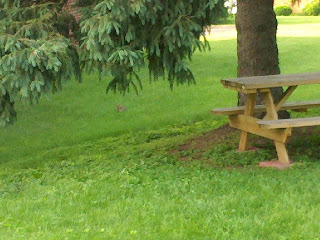 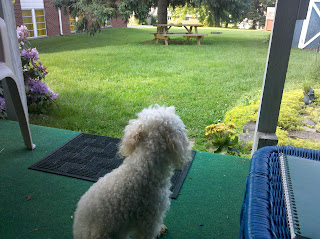 At that point he spotted a different rabbit and ran after it.  (He didn't run very fast, though.  He has an agreement with the rabbits not to actually catch them.)

I called to him with instructions about where to find the first rabbit, but he didn't understand.  He kept looking, but he never did see it.  Poor Tiny.

He wants to please me.  He felt guilty that he couldn't spot the rabbit.

After he came back to the porch he kept looking for the other rabbit.  He knew he had missed it.  He kept looking and looking.
Posted by Pastor D at 8:18 AM No comments:

Pastor D
In 2013 I was diagnosed with a rare blood cancer called "myelofibrosis." This cancer causes a person's blood production to run out of control - first with high counts that created fibrosis scaring in the bone marrow space and then with decreasing counts to the point that you don't make enough blood to survive. For seven years I did pretty well with the newly available JAK inhibitors, but then my counts began to drop and my prognosis became "high risk." The only solution at this point is an allogenic stem cell transplant. The transplant itself is also high risk and difficult - but it is worth a try. My wife and I were married in 1978. We have two adult children and four grandchildren.