(James 1:2 NKJV) My brethren, count it all joy when you fall into various trials,

Why joy?
Anyone can say (and many do say) that they have faith.  Is that faith genuine or false?  It is interesting that we can ask, because some people don't recognize this as a possibility.  Nevertheless, the Bible asks the question and provides this means of answering.  The profession of faith may be genuine or not, but the proof of the faith is demonstrated under the pressure of trials.

In chapter two, James will say it a bit differently: "Faith without works is dead." (James 2:20, 26)  His point is the same, however.  Abraham's faith was put to the test in the requirement that he offer up his son, Isaac.  But since his faith was genuine - he unflinchingly moved to obey - and his faith was demonstrated to be genuine.  Rahab's faith was put to the test in the treasonous decision to side with Israel by hiding the spies - instead of turning them over to the authorities of Jericho.  She did it because her faith was genuine.  (James 2:20-26)

Some poet said, "When in trouble, when in doubt, run in circles, scream and shout!" but patient endurance is more attractive.  Nobody wants to see people lose their temper or their composure.  A person who is ranting and raving or running away has failed the test.  But trials endured build patient endurance and that is what we want - so we can rejoice in trials.  This is how we grow into maturity.

I suppose that many Marine recruits might think the training program is too difficult.  Running, jumping, marching, practicing, polishing, crawling, climbing, etc.  But for people heading into combat, it would be no favor to ease off the trials of training.  They need every muscle and every skill to be completely developed so they are ready for whatever they will face in the war.  Moreover, they want every other recruit to be trained to the same level so they can all count on each other.

This is the message of James to the Christians.  These trials are not an accident.  They are planned by God to develop you.  As you patiently endure these things you will become completely equipped - ready for your continued service for God.

Count it all joy when you fall into various trials!
Posted by Pastor D at 3:52 PM No comments:

I was excited to be able to visit the site of the terra-cotta soldiers near Xi'an, China last week.  Some of the museum displays were closed the day I visited, but the major exhibits were open.  They did not disappoint. 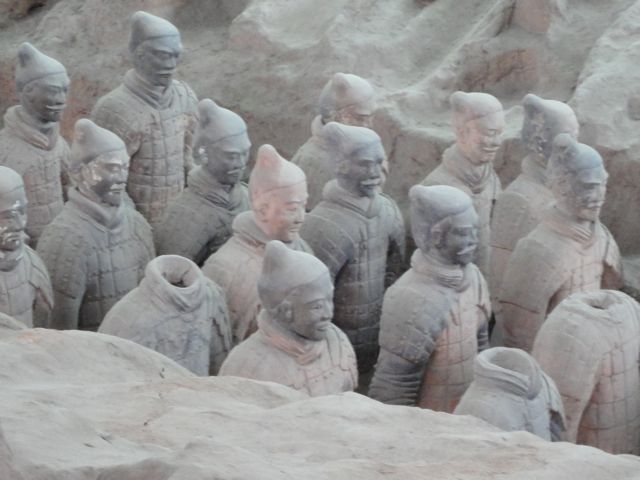 The soldiers are fascinating on many levels.  For one thing, they are an art form of their own.  They are life size with tremendous detail.  Heads, hands and legs were made separately.

The heads are each unique individuals.  The different hats and topknots designate people from different people groups of the time. 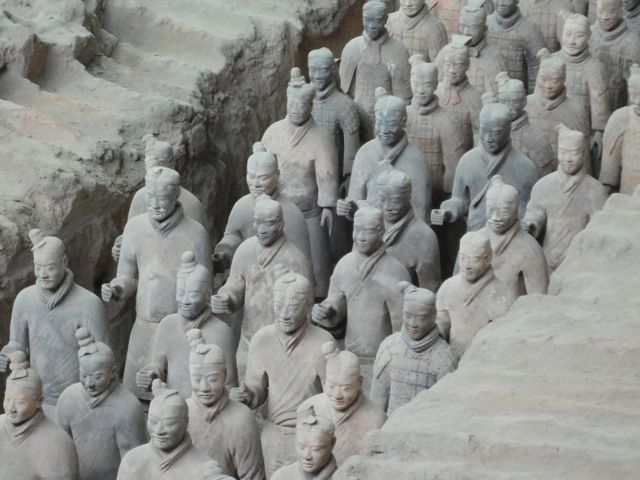 In these pictures you can see that each soldier has a different facial expression.  Some look pleasant and happy - others more serious or even unhappy. 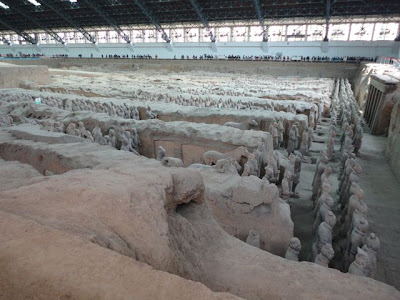 What was most surprising is the size of the army.  In the picture above, there are more than ninety soldier in just the first three rows.  The official count is over 6,000 warriors.  This would have been a considerable military force - had they been real soldiers. 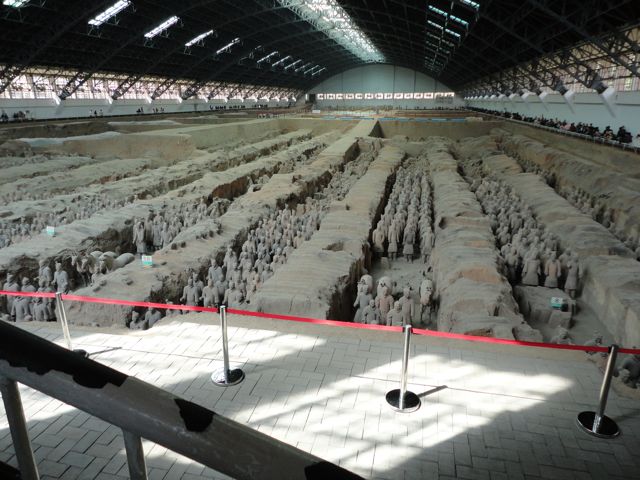 But, in fact these were just clay.  Emperor Qin began the construction of his tomb and these soldiers soon after he became emperor at age thirteen.  Preparations were not yet complete when he died about forty years later - in spite of a conscripted work force of over 700,000 real people.  In spite of all of his efforts, neither his vast human army, nor his large clay army could help the Emperor when he faced death.


(Psalms 20:6–8 NKJV)  Now I know that the LORD saves His anointed; He will answer him from His holy heaven With the saving strength of His right hand.
7 Some trust in chariots, and some in horses; But we will remember the name of the LORD our God.
8 They have bowed down and fallen; But we have risen and stand upright.

While in China, I visited the "Big Wild Goose Pagoda." 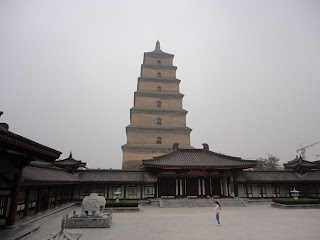 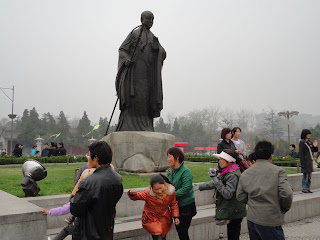 It is an impressive tower, originally built with five stories
in 652.  It collapsed after 50 years and was rebuilt with ten stories in 704.  In 1556 an earthquake damaged the pagoda and it was reduced to the current seven stories.

The pagoda and various buildings on the grounds of this Buddhist Monastery commemorate the travels and work of a famous Chinese Monk named Xuanzang.

Xuanzang lived in the 600's and traveled to India to aquire a complete set of the Buddhist scriptures.  His journey took over 17 years and involved many adventures.  When he came back, he translated the scriptures into Chinese.
It is interesting to me that Xuanzang's work in bringing the complete Buddhist scriptures to China are contemporary with the arrival of Christianity in China in 635.  (This is also around the time that Islam was being developed in the Arabian peninsula - but Islam didn't come to China until much later.)


At the temple many of the people were tourists like ourselves, but there were also those who were participating in Buddhist worship.  This involved burning incense, bowing and praying, and lighting candles.

While the setting is different, it occurred to me that the practice is not all that different from the practice of some groups that call themselves Christian.

The golden images, the saints, the incense, the bowing, the candles, the pilgrimages are all hallmarks of religion based on human works.  It makes no difference at all if the image is of Buddha or Jesus or Mary.  The underlying premise is that by our act of worship I am earning the favor of the Deity.

Biblical Christianity recognizes that salvation cannot be earned.  Salvation in the Bible is a gift of God's grace through the completed works of Jesus Christ - both His sinless life and His atoning sacrifice of Himself for sinners.

While in China I saw many expressions of religion that are not at all common in the USA.  The picture here was taken on the sidewalk just yards from our hotel in Xi'an.  Notice the chalk circle drawn on the sidewalk.  If you look closely, you might notice that the circle has an opening on the side.

Apparently, it represents a grave.  People draw the grave, then burn papers and fake money in the circle to for the benefit of their deceased relatives.  Exactly how this benefits the dead was not clear to me. 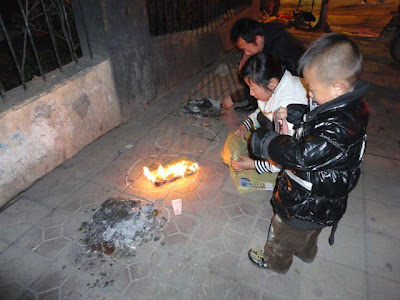 Vendors, conveniently located near the Buddhist temple down the street, sell supplies of paper ventilated with square holes (to assist the burning process) and all sorts of oversize paper money (including Chinese & US currency).

In the morning you would find the circles all down the sidewalks with smudges of ash still in the center.  I saw these both in Xi'an and in Beijing.

I don't know what exactly is going on in the minds of the people who are participating in these practices.  But it does seem to me that they are at least thinking about fact of human mortality.

Praise God that as Christians our hope is in Jesus Christ, who overcame the power of sin and death by His resurrection.  We will not need to hope that our living relatives will burn counterfeit money for us after we are dead.  We have an eternal dwelling - provided by God for us.
Posted by Pastor D at 1:54 PM 1 comment:

Late last night I came home from my brief trip to China.

Even if I were not seriously jet-lagged, it would be impossible to sum up my impressions of China in only a few words.  The country is huge.  It has a recorded history that dates back to thousands of years before Christ.  The cities I visited were very busy places packed with people.  Their economy seems to be booming with literally hundreds of building cranes visible in every direction erecting high rises.


My greatest impression, however, is about the people there.  They were friendly, polite, helpful, curious and wonderfully unassuming.  Of everything I encountered in China - the people were what made my trip such a delight!

I will write more about my experiences there once I get caught up on my work.
Posted by Pastor D at 11:13 AM 1 comment:

Pastor D
In 2013 I was diagnosed with a rare blood cancer called "myelofibrosis." This cancer causes a person's blood production to run out of control - first with high counts that created fibrosis scaring in the bone marrow space and then with decreasing counts to the point that you don't make enough blood to survive. For seven years I did pretty well with the newly available JAK inhibitors, but then my counts began to drop and my prognosis became "high risk." The only solution at this point is an allogenic stem cell transplant. The transplant itself is also high risk and difficult - but it is worth a try. My wife and I were married in 1978. We have two adult children and four grandchildren.